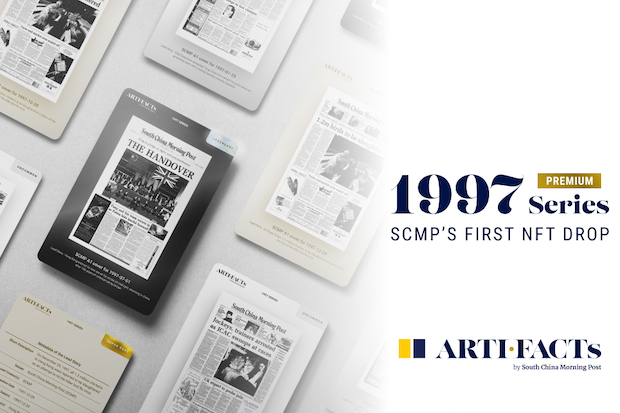 Are NFTs the future of digital media business models? The South China Morning Post thinks so

Artifact Labs is the evolution of what started as an internal project, also called Artifact, and it comes after SCMP first NFT collection sold out in less than two hours on Monday. Running SCMP CEO Gary Liu will step down to lead Artifact Labs, but will continue in his role at SCMP until a successor is named.

“Eventually, all media organizations will need to understand blockchain and the potential of NFTs,” Liu told Journalism.co.uk.

“Ignore the hype and noise around NFTs, this is the fundamental change that NFT technology can deliver to the media industry. At their core, what they are is a technological advancement that provides real value to digital content – verifiable and authentic value. This solves the problem of the digital media business model.”

There are three main goals for Artifact Labs: to use blockchain to preserve history; build a community of NFT collectors and issuers (and in the case of the latter, help them understand Web 3 and the opportunities it offers), and create new business models for media companies and others involved in the documentation of history.

For those unfamiliar with the technology, NFTs are unique digital items that are bought and sold online, using cryptocurrencies. A Tweet, photo or meme can be turned into an NFT. Some of the best known NFTs are the Bored Ape avatars – images of a cartoon ape wearing different accessories.

SCMP began transforming its own historical assets (images and articles, for example) into NFTs last year. As part of this initial project, the team also worked with experts from media organizations, museums, universities and other archival organizations to create a standard for historical artifact NFT metadata.

For most NFTs, the attached metadata includes a handful of attributes; in the case of the Bored Ape, those attributes would be the items the ape carries and the rarity level of each.

“These images are about belonging to a specific community, so metadata may be fine because it’s rarity that counts. But for a historical asset, meaning comes from context and value comes from historical significance,” continues Liu.

He says that while working on the development of this standard, other organizations have shown interest in the project, but doubts whether users would really be willing to pay for NFTs of digitized historical artifacts.

“So we put our money where our mouth is and launched ours first. We spent six months building it, and it took a lot of time and energy – the technology was more complex than expected, even as a product and engineering company.”

Who are the buyers?

For its first launch, called 1997 Premium Series, SCMP created NFTs from its coverage of current events in 1997 – a pivotal year in Hong Kong’s history when the UK formally ceded authority to China.

Pricing was set at relatively affordable rates, with a five-pack of NFTs sold for 97 Flow, a blockchain currency pegged to the US dollar. It means that SCMP sold a single NFT for less than $20 (around £15).

All 6,500 NFTs in the series sold out within two hours of Monday’s launch, earning the company about $130,000 in revenue from the sale of historical content. SCMP consider this to be an important request that they can meet.

But why would people shell out for these assets? People have a range of motivations, and Liu notes that “it’s not just consumerism; everyone wants to adhere to a goal.”

Some of the buyers are Hong Kongers who wanted to own a piece of its history; some embraced the idea of ​​an NFT project whose goal was to preserve history; others are supporters of the SCMP brand and therefore believed that the products would be a good investment.

And some were drawn in by the gamified way the sale was conducted: each pack was a set of five randomly chosen NFTs and around 24 hours after launch, users could “flip” their NFTs like a card hand to see which ones they had drawn.

How others can get involved

The metadata standard SCMP have created is intended to allow other institutions around the world to do the same with their digital assets. Over time, this standard will be updated and improved by a board of experts from organizations that work with historical artifacts.

SCMP invites institutions to create or “mint” their own NFTs using the same code. They will be controlled by Artefact and the council it develops, to guarantee the authenticity of the historical assets that use the code.

Today, Liu sees opportunities in blockchain and NFTs, even for publishers with less technological expertise.

“Some will already know what type of product they want to create and what community they are targeting. Artifact Labs will become a vendor to help them make it. Others will have no idea how to start; maybe their assets aren’t even.” digitized, and Artifact Labs will hold their hand, help them create the product and understand the community.

When it comes to his replacement as CEO of SCMP, Liu doesn’t think whoever succeeds him has to be a blockchain expert. But he thinks they – and other media leaders – should be open to it.

“The growing adoption of blockchain and Web3 technologies is part of understanding users. To be an expert on changing user behaviors, you need to think about these emerging technologies and how they can be used,” he concludes.

If you like our news and feature articles, you can sign up to receive our free daily (Monday-Friday) email newsletter (mobile friendly).