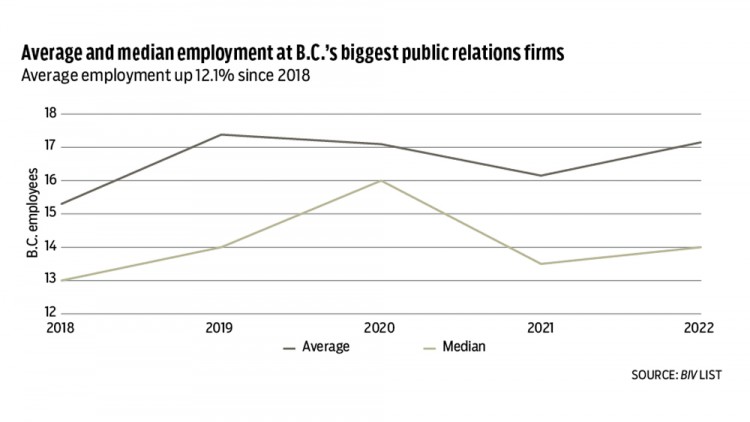 BC’s leading digital media agencies have struggled during the pandemic, according to data from Business in Vancouver’s Biggest Digital and Media Agencies in BC list (https://biv.com/lists).

The median number of employees showed signs of decline before the onset of the pandemic, peaking in 2019. However, the median has not declined as much as the average during the pandemic, suggesting that small digital agencies at the bottom on the list weathered the storm better. than the larger companies higher on the list.

In the longer term, many digital agencies have seen significant employment growth. For the top five digital agencies with at least five years of available data, average employee growth was 37%. Number 1 BroadbandTV recorded the largest five-year increase in employment in British Columbia: a 92.3% increase to 400 employees in 2022, from 208 in 2018. Number 7, Major Tom Agency Inc. , saw the largest five-year drop of the top companies with comprehensive data. available: down 22.4% to 45 in 2022 from 58 in 2018.

British Columbia’s biggest public relations firms, meanwhile, rebounded after weathering the first year of the pandemic, according to data collected on Business in Vancouver’s Biggest Public Relations Companies in BC list (page 12).

The average number of BC employees working at the province’s major public relations firms peaked in 2019 at 17.4.

Over the past five years, the top five PR firms in British Columbia have grown by an average of 37.1%.

No. 2 Hill + Knowlton Strategies Canada posted the strongest five-year growth among the top five. The company more than doubled its workforce with a 123.1% increase in 2022 compared to 2018. •