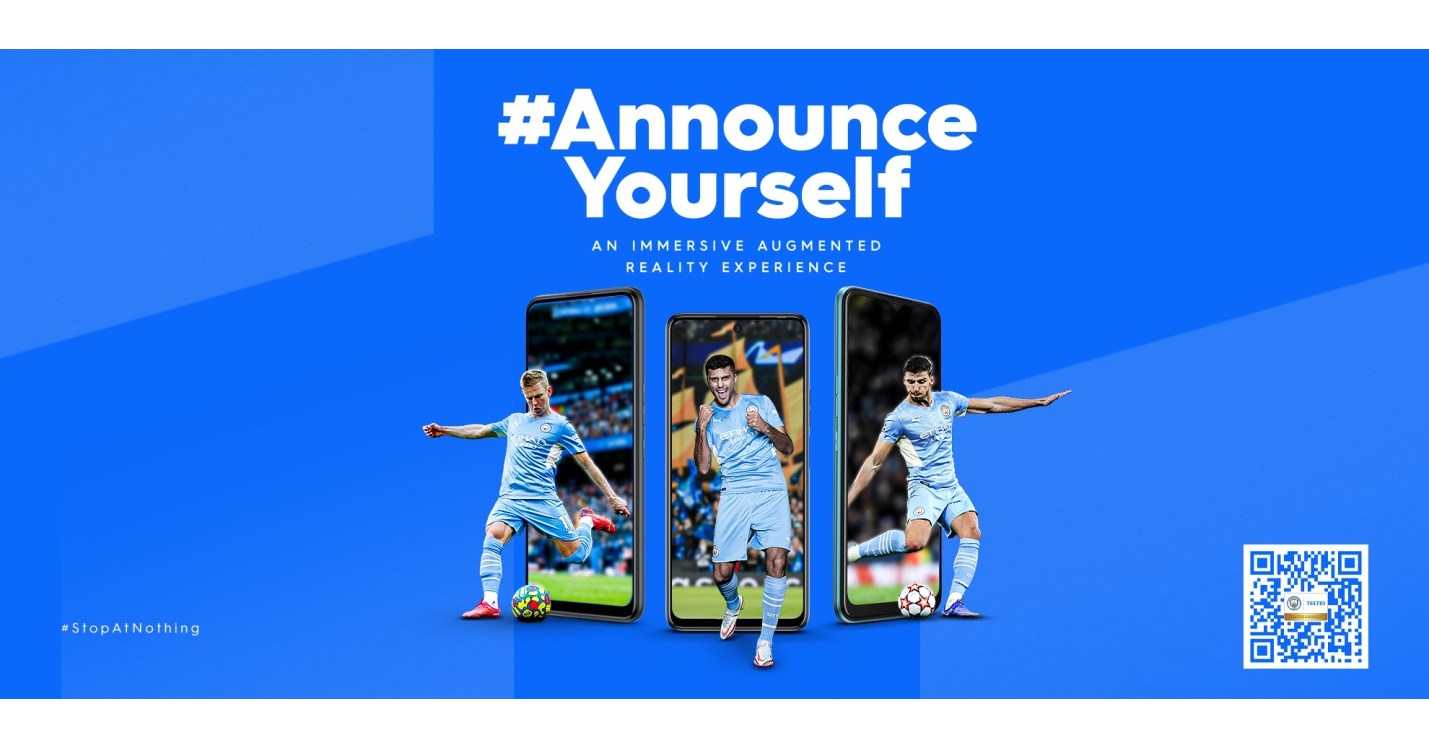 The global premium smartphone brand has launched the #AnnounceYourself AR experience campaign allowing football fans to interact with the football club in exciting and new ways.

Users could even participate in TECNO Mobile 3D penalty shootout games before showing off their skills and scores on social media. The AR Experience campaign culminated in a grand raffle where lucky participants won rare VIP matchday tickets and proceeded to a Manchester City home game during the season.

To enter the virtual world of Manchester City, rather than an app or software, football fans simply pull out their smartphone to scan a QR code with their built-in camera app from anywhere in the world.

With an AR platform purpose-built for the campaign, features like 3D modeling, custom animation, 360-degree video, mini-games, and providing advanced analytics fueled the entire AR experience for the fans.

The campaign also evolved in real time by being interactive in nature. Users were enthralled with various continuous and exclusive digital content updates in the virtual world and fans could come back time after time to experience new invigorating features such as special phone backgrounds and unique video media.

A world first and a worldwide success

As the world’s first immersive AR experience campaign centered around the football league, the #AnnounceYourself campaign has been immensely successful.

During the months of January and February, hundreds of thousands of users around the world waved their mobile phones to participate in this once-in-a-lifetime experience. #AnnounceYourself wasn’t just a world premiere, it was a worldwide hit among the club’s fans.

By emphasizing brand communication, TECNO does not only focus on sales and profit. The brand works hard to ensure that customers from all corners of the globe are deeply engaged and having fun through campaigns such as the #AnnounceYourself campaign.

The #AnnounceYourself campaign shows how the premium smartphone brand understands and recognizes the ability of sport to unite and connect people. The success of the #AnnounceYourself AR experience campaign has also led to progress in TECNO’s awareness, reputation and loyalty.

In doing so, TECNO not only demonstrated the far-reaching effects of using sports marketing, but also worked to cement the brand’s presence on the global stage. Following the success of the previous collaboration with Man City, this is yet another demonstration of how TECNO unleashes its creativity in sports marketing. Fully adhering to its brand spirit, “Stop At Nothing”, TECNO will continue to invest its efforts in developing sports marketing through various means so that avid fans can continue to interact with their favorite brands and sports teams in a way that would never have been possible.

TECNO is a premium smartphone and AIoT device brand of TRANSSION Holdings. With “Stop At Nothing” as its brand essence, TECNO is committed to unlocking the best contemporary technologies for progressive individuals in global emerging markets, offering them stylishly designed smart products that inspire consumers to discover a world of possibilities. . TECNO understands the needs of consumers in different markets and provides them with localized innovations and design breakthroughs demonstrated by their proficiency in serving consumers who are “young at heart” and who never stop striving for excellence. TECNO’s portfolio covers smartphones, tablets, smart wearables and AIoT devices designed for consumers in over 70 emerging markets around the world. TECNO is also the official partner of Manchester City, Premier League Champions 2020-21. For more information, please visit: www.tecno-mobile.com.