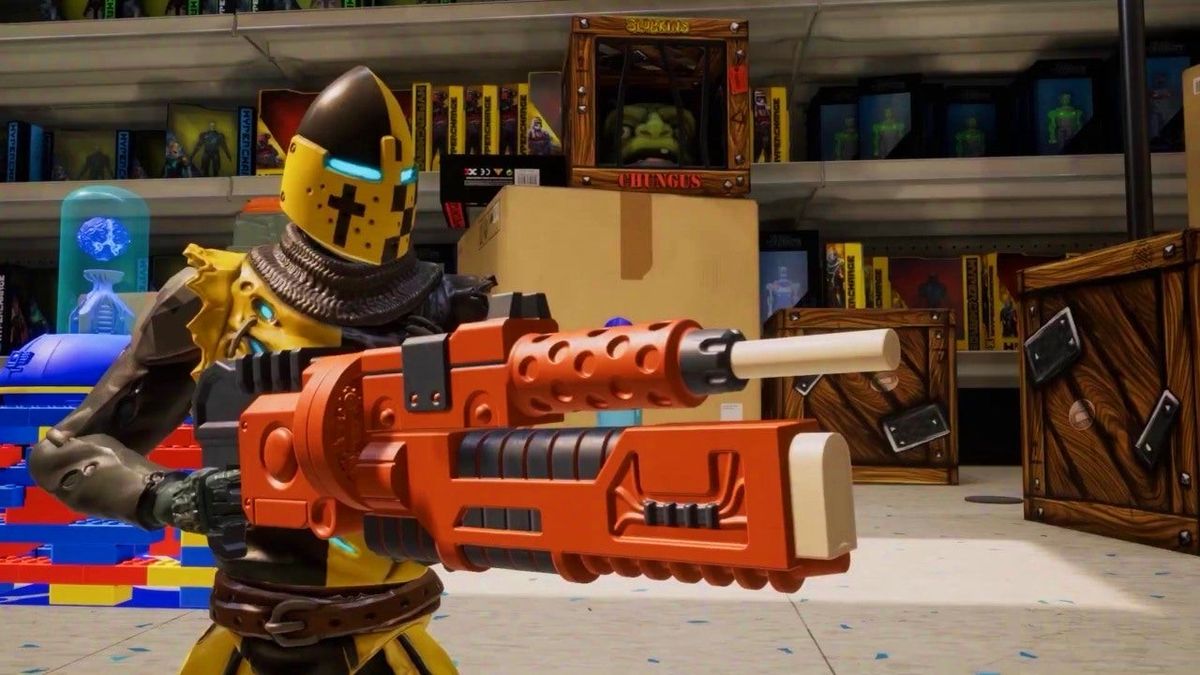 When a new multiplayer shooter launches on Steam, one of two things usually happens: either it captures the attention of a dedicated player base, or it crumbles into a wasteland of empty servers. As brutal as it may be, that’s how the finicky digital PC gaming market works. You have a chance to launch a game and make your first impression. Or you ?

There’s another maneuver that a few developers have tried recently, which has worked pretty well so far: pretend your old game is new and try not to mention that it previously failed.

This overhaul phenomenon played out this week with Hypercharge: Unboxed, a warring miniatures multiplayer FPS you may have seen a clip of on Twitter.

dear Xbox fans, positive vibes. let’s make this tweet go viral! We are five adults creating the game of our childhood dreams in which you play as “action figures” ✅ RT and RT some more! If you want to become an action figure on Xbox, sign up here: https://t.co/siom0AIxZO pic.twitter.com/v3IuIjsf5IJuly 3, 2022

The official Hypercharge Twitter account has spent the past few weeks sharing daily clips from the game, usually with a short pitch like “we’re five adults making our childhood dream game” or “imagine a game based on our miniatures childhood action.” They often ask for help in making their tweets go viral or tag major influencers. Going by the tweets, you’d be forgiven for not realizing that Hypercharge was released two years ago, and on two different platforms. Hypercharge released in 2020 on Steam and Switch, and it was available in early access for years before that. Despite generally positive reviews and being on Steam’s best seller list, it didn’t hold its audience for long.

When it comes to Twitter, however, Hypercharge is a new viral hit. Those daily clips of counterfeit Goku and GI Joe action figures battling it out in charming toy store arenas have paid off. One particularly popular tweet amassed 14 million video views in just three days.

Developer Digital Cybercherries recently announced plans to bring Hypercharge to Xbox and PlayStation one day, but that’s the only new thing about it. It’s the same game as a few weeks ago, when hardly anyone knew about it, except now it’s surrounded by new games.

As far as Digital Cybercherries goes, the Hypercharge viral explosion was a happy accident.

“We never disguised or misinformed players that Hypercharge hadn’t been released and, in fact, encouraged them to check out the other versions of the platform,” studio rep Joe Henson told PC. Gamer. “We communicated to our community about porting the game to Xbox and PlayStation, for whom it will be a brand new game and so the communications for that audience are tailored. But I never hide the past of the game, might I add. “

The Hypercharge Twitter account acknowledged the game’s past struggles this week when link to a 2020 feature (opens in a new tab) by PCGamesN, although the tweet frames it in a kind of “now that we’ve done it”.

Henson says the recent commotion started after he posted a video from the Hypercharge account about the abuse he had suffered from Xbox fans interested in the Hypercharge console port. “I never imagined this would all go viral, but I was in the wrong place and wanted to start a conversation with other indie developers about the toxicity of the industry,” Henson said.

Developer 1047 Games pulled off a similar old-new-game feat with Splitgate, the “Halo with Portals” arena shooter that had a moment in the spotlight this time last year. Splitgate hit hard when it entered its “open beta” on PC and consoles in 2021, racking up more than 10 million players over a few months. Except that Splitgate wasn’t a new game at the time, and it had already left its beta stage nearly two years earlier.

Splitgate was released in 2019 on Steam (at the time it had a subtitle, “Arena Warfare”), and despite generally positive impressions from us, hardly anyone played it.

As 1047 prepared to launch on consoles in 2021, it put the game back into “open beta”. Even the PC version, which had been completely released for two years, suddenly became a beta version. I’m no marketer, but I think the beta tag had more to do with making some of that new gaming buzz than it was fixing bugs that weren’t caught during the original beta period. And so Splitgate, the cool but wading arena shooter from two years ago became Splitgate, a new shooter in open beta.

Promoting a game in the Internet’s tangled web of changing algorithms is difficult, and making a good game does not guarantee success. But when an old game is presented as a new one, I can’t help but feel like someone tried to snatch one away from me. This spoils some of the fun of discovering new games on Twitter. I remember the thrill I felt when Dennis Gustafsson tweeted the first Teardown gameplay (opens in a new tab), a destruction sandbox game that eventually became a Steam hit and one of my favorite games for years. The other other On the other hand, asking for the truth in marketing is about as useful as asking a mountain to move.

Hypercharge and Splitgate aren’t the only games blurring the line between old and new, or released and unreleased: games “come out” of early access all the time without really changing, or go into “open beta”. with a full microtransaction store, or uncheck and then re-run. In a recent attempt to make sense of a weird modern game release, I’ve come to the conclusion that Overwatch 2 isn’t actually ‘Overwatch 2 (opens in a new tab)‘.

So, did the artificial buzz of the new game work?

Splitgate’s playerbase isn’t as big as it was a year ago, but things seem to be going well. There are still a few thousand people playing it daily on Steam, still more than enough players to support a niche arena shooter with cool ideas, and there are more players on consoles. It hasn’t maintained its peak momentum of 67,000 players in August 2021. Our taste for arena shooters may be fleeting, but 1047 Games was able to turn its buzz into a $100 million funding round so than it was in its heyday, and the game continues to be relatively successful – Halo Infinite has more Steam competitors, but not by this a lot.

As for Hypercharge, the jury is still out, but so far its popularity seems to start and stop at those 14 million video views. This week, its number of concurrent players on Steam peaked at 555. That’s several hundred players more in Hypercharge than a few months ago, but still a far cry from its all-time high of 900 players in April 2020, the month of its launch. It’s possible that the console versions will change this, but no release date has been announced yet.

The originally published version of this article has been updated to reflect feedback from Digital Cybercherries.