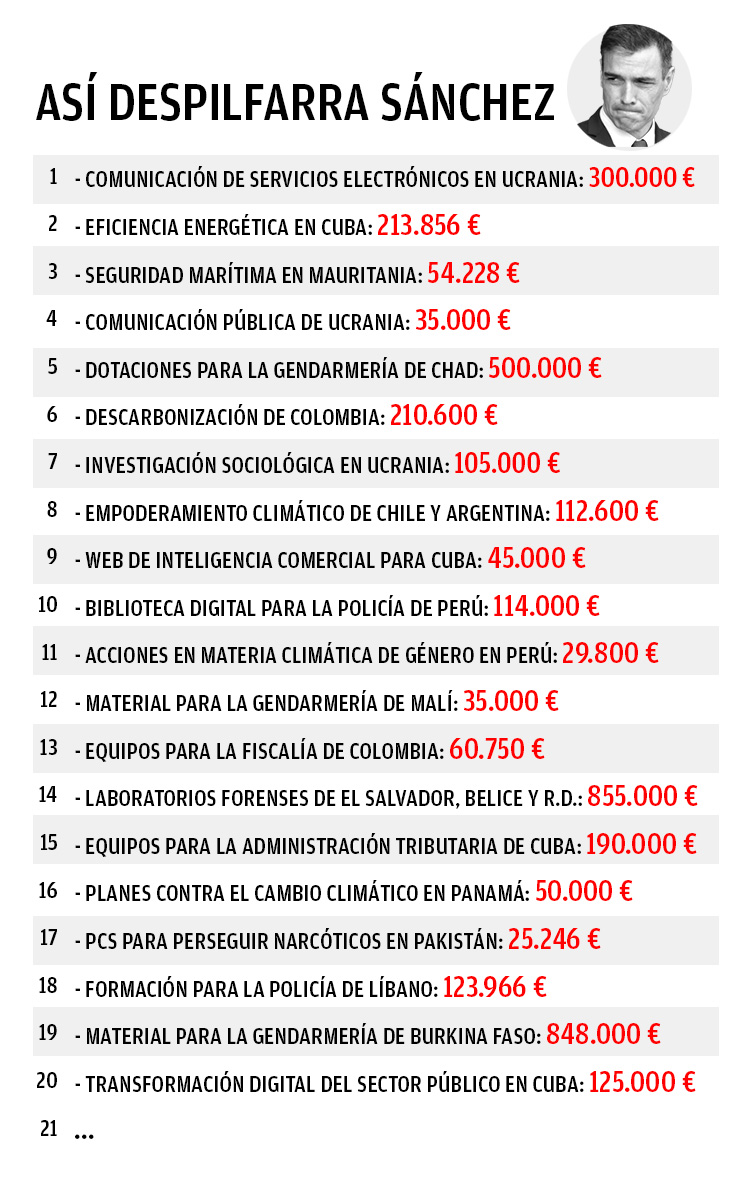 The government’s waste of Pedro Sanchez reached unsuspected heights. This emerges from the latest contracts from the International and Ibero-American Foundation for the Administration of Public Policies (FIIAPP), an entity made up of several ministers from the PSOE Executive and Podemos. These are dozens of contracts of more than 100,000 euros each for communication strategies in Ukraine, plans against climate change in Latin American countries, forensic laboratories for Belize and, among many other concepts, police equipment for Mali, Chad, Mauritania and Burkina Faso.

The Recruitment platform del Estado collects this series of tenders processed in recent months. OKDIARIO has located concepts as extravagant as 190,000 euros for a contract for “Equipment for the processing of sensitive data from the Cuban Tax Administration ” o € 335,000 for “Communication campaigns aimed at groups of users of electronic services and communication of public brands in Ukraine ‘.

Also with regard to Cuba, a regime that maintains millionaire debts with Spain, the executive of Pedro Sánchez has dealt with contracts on “Digital transformation of the public sector in Cuba “(125,000 euros)”, Web platform for business intelligence for Cuba “(45,000 euros) and, among others,”From renewable sources energy and energy efficiency in Cuba ”(213,856 euros). European funds are also used to finance all these expenses.

One of the subjects to which the FIIAPP dedicates multiple contracts is climate change in developing countries. Although the Executive does not solve the problem of emissions at our borders, it is launched to try to solve this problem in other countries without industry. Let us recall for example that the Government maintains hundreds of polluting vehicles within its Mobile Park or diesel boilers.

213,856 euros are allocated to projects on renewable energies and energy efficiency in Cuba, 99,900 euros in low-carbon agrifood chains in Costa Rica, 210,600 euros in a Decarbonization Strategy of Colombia, 140,400 euros additional in public policies for the mitigation of greenhouse gases in Colombia, 34,200 euros in a Climate Empowerment Plan of Chile, 50,000 euros a Citizen participation process on climate change in Panama, 29,800 euros in Actions on climate issues, gender and vulnerable groups in Peru and 78,400 euros in another action strategy for climate empowerment in Argentina.

This foundation was at the center of the controversy because Pedro Sánchez granted them 1.2 million euros more in the general budgets of the State after giving quads to the Moroccan police. It is striking that while the police and civil guard have big loopholes, the Spanish government purchases top quality equipment from foreign governments.

From the list of dozens of security contracts, stand out: Support in the field of maritime security strategy in Mauritania (54,228 euros), Endowments to the Gendarmerie units of Chad (500,000 euros), Digital library of the training schools of the National Police of Peru (114,000 euros), Removable sheds for vehicles of the National Gendarmerie of Mali (35,000 euros), Maintenance of 21 motorbikes Niger (6,300 euros), Computers for the Ministry of Narcotics Control of Pakistan (25,246 euros), Promotion of community policing in the Lebanon (123,966 euros), Equipment for the Gendarmerie units of Burkina Faso (848,000 euros) or, among others, Support for the reform of the Burma (35,000 €).

It is also surprising that the government is subsidizing new forensic laboratories in El Salvador, Belize and the Dominican Republic (855,000 euros) o Equipment for forensic institutes in Belize and Honduras (460,200 euros). These contracts of the Spanish government to countries like Belize or Panama which were tax havens until a few years ago and keep taxes low.

Other surprising contracts are called: Investigative Teams for the Attorney General’s Office Colombia (60,750 euros), Participatory processes in the development of the Platform Indigenous villages (28,000 euros), Disaster risk reduction in Colombia (58,100 euros) or, among others, Sociological research on digitization in Ukraine (105,000 €).

The entity was founded in 1998 and has a budget of around 70 million euros per year. Within the Board of Directors of the FIIAPP, according to its statutes, it is composed of a Vice-president of the government –Until her dismissal, it was Carmen Calvo–, Minister of Foreign Affairs, European Union and Cooperation, Minister of Justice and 14 state secretaries of several ministries, among other positions.

Disclaimer: This article is generated from the feed and not edited by our team.